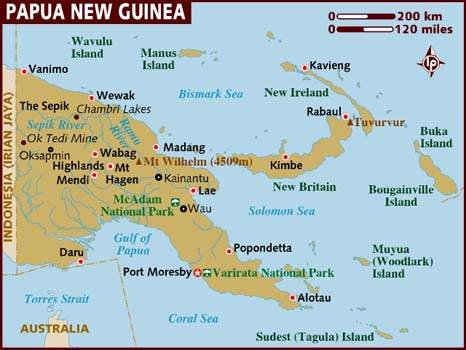 The first recorded encounters with the Island were recoded by the Portuguese and Spanish explorers – among them Meneses and de Retez – in the early 16th century. The name New Guinea was first recorded by Retez in 1545 because of the resemblance of the people to those on the African coast of Guinea. From 1884-1914 the northern part of the eastern half of the island was a flourishing German colony while the southern part was ruled by the British. With the out break of WWI in Europe, the northern part became an Australian trust territory.

During the WWII Japan invaded first the islands surrounding PNG and then the mainland itself. A major campaign was then mounted by the Australian corps from the south over the ranges via the Kokoda trail to oust the Japanese. The war claimed some 215,000 lives. From the north the Japanese were pushed back by US forces. It was during this war that the primitive peoples inhabiting the highland regions were first encountered. Together with the Australian patrol officers, educators, social workers, gold diggers, and other fortune seekers, the missionaries went into the jungles of PNG to work among hundreds of tribes and language groups.

PNG remained under Australian mandate until 1974 when Self-rule was granted and then in 1975 full independence. PNG is still largely dependent on Australia and is a full-fledged member of the British Commonwealth.

Papua New Guinea is rich in natural reserves of gas, oil, gold, diamonds and copper. Together with its agriculture and forestry PNG is an attractive entrepreneurial target for many countries especially China, and Malaysia. This has created a stage for much corruption and frustrated violence especially in the larger towns. Nevertheless, PNG is a beautiful country with a beautiful people.

PNG is the second largest Island in the world after Greenland,

Population is around 8 million (There is no complete registry)

PNG according to Linguists has 864 distinct languages